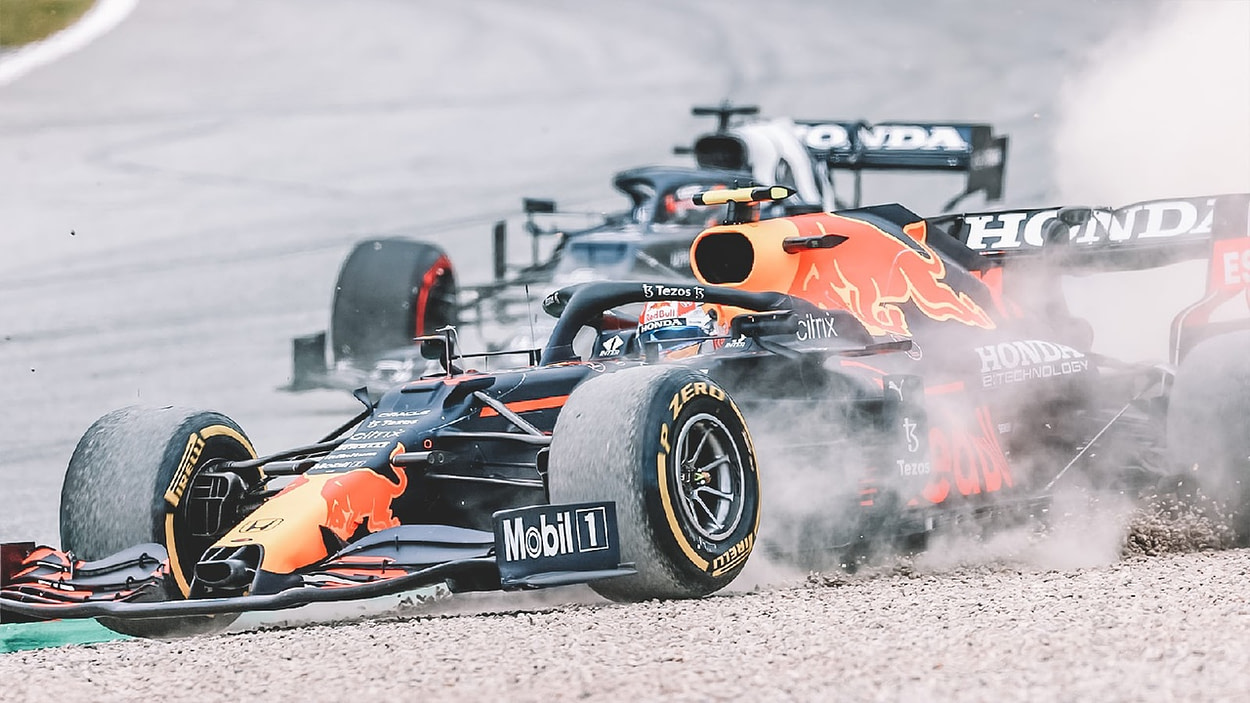 Austria F1 race deserves its place in the golden collection of the 2021 Formula 1 season. After the Grand Prix, most drivers will have to take a path of recovery of the nervous system. Eight of our braves already called for breach of the yellow flag. Sergio Perez, Charles Leclerc, Carlos Sainz, Daniel Ricciardo, Peirre Gasly, Nicholas Latifi, Nikita Mazepin and Antonio Giovinazzi are ready to answer according to all the rules.

Everyone had to worry at the Austrian Grand Prix: Sergio Perez about his elusive position, Lando Norris about Sergio Perez. Yuki Tsunoda seems to have reached a new school class after two identical penalties. At the Red Bull Ring everyone was tense until the end: FIA penalties in the form of five seconds rained down under the curtain of the race. Who proved to be the toughest and who lost their nerve after the Austria F1 race 2021?

No hammer time, due to kerb damage.

Almost 30 points loss of downforce is the price of the notch damage to Lewis Hamilton’s car. Thus, Toto Wolff explains the crash of Mercedes 44 car to fourth place. The real reason being the atmosphere of anger throughout the Austrian Grand Prix. Lewis Hamilton had advanced to second place in the first stint of the race after starting from fourth position on the grid and overtaking Mercedes team-mate Valtteri Bottas and Lando Norris of McLaren. The battle was so fast that Hamilton had sustained damage to the left rear of his car, which cost him downforce. Hamilton has not been able to handle that burden, no one is immune from mistakes, especially when it comes to winning the Formula 1 world title.

Valtteri Bottas is like a machine, proves its place in the team.

Another Mercedes driver, meanwhile, endured those torrid laps. Finn followed the instructions from the captain’s bridge very carefully. He did not give in to the panic and pressure of Lando Norris and Sergio Perez. Valtteri Bottas finished Austria F1 race third! A valuable plus in the piggy bank “Yes” to stay in the Mercedes team in 2022

Not tenth, but George Russell has at least tried.

Another candidate for the 2022 Mercedes car, gets out of his skin to first overtake his teammate Nicholas Latifi and then finish in the top ten.  Fernando Alonso, who was annoyed on Saturday, could not help but do everything to prove that Alpine will still fight! Thus, Spaniard buried George Russell’s hopes for tenth place. It is not a loss, but a success that has not been seen at Williams for a long time! Another plus in the piggy bank of the toughest drivers at the Austrian GP.

The nerves of the spirited warrior Fernando Alonso lay bare on Saturday. Sebastian Vettel inadvertently ruined the battle for a starting spot on his birthday. However, that did not prevent Fernando Alonso from nibbling away positions at the Austrian Grand Prix. Without pity and regret for George Russell, Alpine number 14 finished 10th. Plus one for the heroes of the Formula 1 Austrian race.

While some are hardened in battle, others prefer to drive off peacefully. Esteban Ocon had just signed a three-year contract with Alpine team, but for some reason he did not ride with such optimism. The Frenchman was trapped in turn 3 by Mick Schumacher and Antonio Giovinazzi, damaged his right front suspension and pulling away of the battle.

Sebastian Vettel is the chilling driver at the Austrian GP

The Formula 1 weekend in Austria does not start so well for Sebastian Vettel. On Saturday he celebrated his 34th birthday with congratulations and best wishes. On this occasion you can relax in principle, but why relax alone if it is possible in a company. So he managed to attract the attention of Fernando Alonso on Austria F1 2021 qualification. On Sunday he picked up Kimi Raikkonen for the company. What caused the breakdown of the German driver behind the wheel of a green Aston Martin is a mystery. According to Sebastian, Kimi simply did not see him during Sunday’s race. Alonso and Raikkonen are very experienced drivers and of course nobody is offended. We are sure they have already tried a piece of birthday cake together.

After the Austrian Grand Prix, no one will twist their tongue to say that Charles Leclerc is not brave, he is even braver! If Carlos Sainz has managed to successfully escape the tension, Charles has been in the true epicenter twice. Furious Sergio Perez was not prepared to share the road with Leclerc. The Mexican devoured all the empty places on the Red Bull Ring and received two five-second time penalties. Another plus for the toughest drivers at the Austrian Grand Prix.

It’s hard to gauge how strong Verstappen’s nervous system is at the Austrian Grand Prix, after all he had a busy start and the rest of the hurricanes, including the rain, passed him by. Max is the main character on the Red Bull Ring for his team, his fans and on the homely track. And he’s very lucky because he continues to lead the F1 drivers’ standings. Plus one of the lucky drivers at F1 Austria race.

We all know what Sergio Perez is capable of, but no one is predicting that he can drive like that! Like a furious rage, the Mexican was ready to accelerate to the very last and devour the entire free space at the Red Bull Ring. Everyone got into a frenzy! Charles Leclerc and Lando Norris also caught it! At the restart of the race, after the withdrawal of Esteban Ocon, Perez attacked Norris at Turn 1.

He ran far into the exit and made no progress, but tried again from the outside at turn 4, where Lando stood firm in his defense and Sergio ran wide into the gravel to take 10th place, but he came back to make up for lost time with even greater force! It seems that many will now avoid him. Mexican finished the Austrian Grand Prix in fifth place in Formula One, but dropped to sixth place as a result of a penalty.

Lando Norris proves once again that he is a F1 car wizard. In the background of Daniel Ricciardo, who has almost become accustomed to the new Mclaren, Norris knows a secret button on his car or a magic word. Here’s the facts: Norris consistently scores points in the 2021 Formula One season. Lando fought back in the battle with Hamilton, Bottas and above all Perez at the Austrian GP! His hand on the steering wheel of the McLaren did not even shake. Norris is the driver of the day at the Austrian GP and one of the toughest drivers. Just call him SuperLando now!

The second round of F1 Austria 2021 at the Red Bull Ring will enter Formula 1’s golden collection with the Baku Grand Prix. The race is full of excitement and reveals the potential of some drivers that we have not thought about before.

How much does F1 car cost?