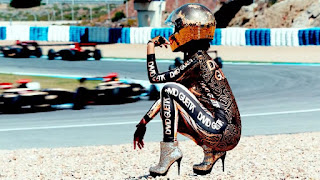 What can lift the spirit as much as good music! Great music videos can make us very positive. But, it’s much better to watch when it’s about cars, especially sports cars. Sit back and let’s see the top music videos with cars in them ☺

Cars: 2012 Lotus E20
I think this is one of the best f1 themed music videos. Moreover, here we can watch Lotus F1 driver Romain Grosjean cameo appearances and his podium with Guetta and  James Purefoy.

Cars: Porsche 911 T, Ferrari 512 BB
No less no more, Calvin Harris wasn’t shy in admitting that the whole premise for making this video was simply to “look cool”.

Cars: Maybach.
Kanye West and Jay Z  destroyed a million dollar Maybach in the filming of this single. The four doors were removed while the roof is split from the middle to silverback over the boot.

Car: 1968 Chevrolet Camaro
This song was set as a ringtone on my phone. In the United States, “Ride wit Me” became Nelly’s highest charting single at the time, peaking at number three on the Billboard Hot 100 (2002).

What about something new? The original music video is very impressive as I saw, so, let’s look at this version, I think it’s much better.

This song was sounded from all charts from all over the world. I can’t say here is a lot of cars, but this McLaren P1 is the most popular car.

This is the best soundtrack that is associated with fast cars (sports cars) for me. I love Daddy Yankee music, but the official video hasn’t enough cars, so I’m offering you a slightly different version, I think you’ll like it.
I hope you enjoyed my choice. Stay safe, race at home.
What types of music do you listen to? What’s your best car music video?
0 0 votes
Subscribe
0 комментариев
Inline Feedbacks
View all comments

TOP 10 Christmas gifts for F1 fans that inspire you

The top of fastest cars in motorsport.