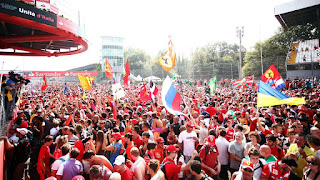 Formula 1 fans are simple, kind and always ready to help. I want to say every time before Formula 1 Sochi GP, there been starting a real rush about tickets: someone wants to sell F1 tickets very high price, someone - to buy those very well, someone wants to get F1 Friday party tickets. Among other things, you can find just unique messages on social networks and publics.

Not so long time ago I found a public message that confused me. It was in the most popular social network Vkontakte ( more popular than Facebook) on the popular public.
A young man, Formula 1 fan, asked a favor for popular public about Formula 1 (several tens of thousands of subscribers).

Excerpt - "Our very good mate loves formula 1 and going to Formula 1 Sochi Grand Prix. He won special race tickets. However, it will be difficult for him and his daughter to pay for the flight from a distant city. So let's chip in for his airfare."

Naturally, most likely those F1 tickets for the whole weekend VIP. Generally, I'm never interested in such things, but something is wrong with this message.

Why I am talking where is the desired link?
As you guessed this F1 fan got not childish comments. According to his words in social media, he got the money for plane tickets, and the message disappeared from popular public about Formula 1. In connection with this, I have a question for you - would you ask for help in such a situation? Would you ask for help if winning Paddock Club Formula 1 ticket, but didn't have the money for traveling? Would you talk about this to 100 thousand followers audience?

I think it's right to talk about what's bothering you, rightly with closeness people. But when you talk about it to hundreds of thousands, you have to be prepared your problems will be heard and going through. Write in the comments what you think and how you'll be acting in this situation: helped or not?
Good wishes to all.