Racing weekend: everything that we have to know March 15-17th.


There were several notable moments, which you will gladly tell your friends over the weekend. But, let's summarize those racing weekend very quick!

1. Formula 1 2019 season has started!
15th. March Formula 1 cars finally released on the road. There were first light, first flag because the official start of Australian GP was done!

2. Formula 1 exception.
Williams Formula 1 Team bad performance - is a unique incident for me. All these stories with the delay Formula 1 car, anyway 2 seconds on the lap is too much. You can read more here.

It is clear that we all waited for this weekend, each of us had certain hopes. Someone was Scuderia Ferrari F1 team and someone for Mercedes. If you pay attention to all these expectations, we can note for 2 unexpected ones.


1- Ferrari hadn't sped dominant,
2-Valtteri Bottas is leading.
The fans faces dramatically changed when Mercedes has been showing a true power, Lewis Hamilton' fans stopped to smiling, when Bottas was been leading.

That's all you need to know before the Bahrain Grand Prix. Well, almost everything.

4.McLaren is driving.
This place is so unsafe that everything is very careful. Looks like McLaren's driving step by step meters by meters. Sure this team shows the best results if we thinking about the Williams F1 team, but the result of L. Norris in the final table is just wonderful.

Everything in Formula 1 could be changing dramatically, do not believe all those people who say that it's boring! 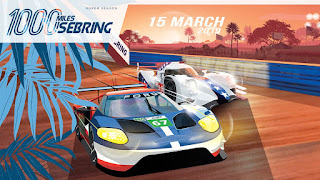 5. WEC win.
While the McLaren F1 team moves right along, F. Alonso, Sebastien Buemi, and Kazuki Nakajima won the 1000 Miles of Sebring race, Of course, obviously, the advantage of the Toyota Gazoo Racing team is. However, whether we like it or not, this victory will go in Motorsport history.

6. WEC record
The most amazing thing that the victory seemed not enough, the Spaniard set a new record at the racetrack. Amazing? No! The lap was a 1:40.124 while Racer reports that the previous lap record was a 1:43.274 set by Sebastien Bourdais driving a Peugeot 908 back in the American Le Mans Series Days.
Cheers for Toyota Gazoo Racing !
If you want to know more about how it was - read here.

Don't forget WEC' next stop is scheduled for May 4th at the SPA.
We look forward to the Tour de Corse rally Corsica- March 28th. Drivers and teams are preparing for this event. We have a lot of interesting things ahead of us,
Formula 1 GP Bahrain will -  March 28th.

Don't forget to note the exact time and put your alarm clock, the season started!