What?Located near the end of the Vargåsen stage of Rally Sweden, Colin’s Crest is an enormously gnarly jump, the most spectacular jump in all of WRC.

Where?
Skruvat Colin’s Crest Arena. It is the most popular spectator area of Rally Sweden, attracting thousands of rally fans.

№5 Ken Block –  37 m. (2011)
When?
Since 2009 rally organizers have presented the Colin’s Crest Award, named in honor of 1995 World Champion Colin McRae, to the driver who jumps furthest from the huge crest.
How?

Every year, rally organizers measure how far each competitor flies over the crest, the winner receiving the coveted Colin’s Crest Award.

Colin McRae was perhaps the most legendary rally racer of the modern era. After his tragic death in a helicopter crash in 2007, rally organizers set out to find a way to honor the Scottish champion.

On Saturday the WRC cars pass through Colin’s Crest twice – in the SS 11 Vargåsen 1 and SS 14 Vargåsen 2 stages, as well as the Historic class in the stage between the two.

As a mark of respect for Colin McRae, the Rally Sweden organizers set up an award for the longest jump over a crest on the Vargåsen stage of the rally. Making the longest jump here and winning the Colin’s Crest Award brings honor and glory that almost beats an overall victory.

Despite its slightly inaccessible location, which requires a long walk or a 4WD, this is by far the rally’s most popular arena. It brings together almost 10,000 more or less crazy fans, making it one of the most awesome experiences in WRC.

*Thanks for reading! Take care and do believe in your dreams, cause “Those who don’t jump never fly”! 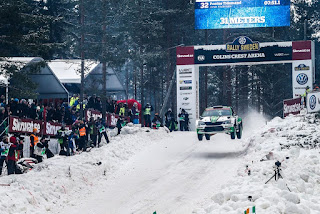 Rally Croatia 2022: Key storylines before we face the challenge in Zagreb

ACI Rally Monza guarantees that you stare until the last minute!