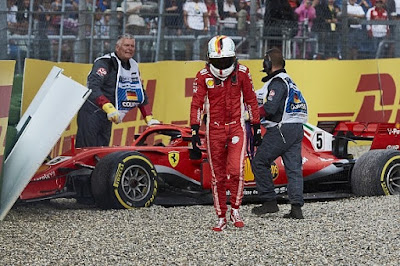 We will remember this German Grand Prix for a long time. Tactics and strategy is the main things at Germany GP. We'll never know is it fair or not.


Team: “So Kimi. this is Jock. You’re aware that we need to look after tyres, both cars need to look after tyres. And you two are on different strategies. Your strategies are slightly different and we’d like you not to hold up Seb. Thank you”
Raikkonen: “Err I don’t... sorry but can you be direct? I don’t know what you want me to do.”
Team: “Losing as little time as possible obviously but where you can Seb is capable of going quicker but he’s hurting his tyres and you’re as well. We need to look after them.”
Raikkonen: “Do you want me to let him go? Basically just tell me!”

S. Vettel's crash was the most dramatic thing at Hockenheim.

The most encouraging performances of the McLaren

A full-text version on motorsport.com.